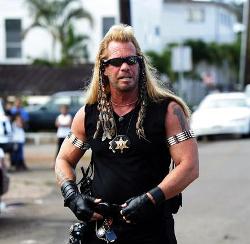 Childhood: The oldest of four children, Duane Lee Chapman was raised by a Navy welder father and minister mother in Denver, Colorado. As a teen, he had several run-ins with the law, including being arrested for robbery. In 1977, he was sentenced to five years in prison for the murder of Jerry Lee Oliver. After serving his time, Chapman vowed to redeem himself by operating on the right side of the law. While Chapman attributed his rough exterior image and personality to his allegedly abusive father, he later referred to his Cherokee Indian mother as his “best friend” and credited her with putting him on the path to God.

Occupation: After Chapman served his sentence, he found it hard to find a job and started bounty hunting. Much later he moved to Holliwood where he had come to the attention of the American public, and was in the midst of the media attention. Then A&E decided to base an ongoing reality series around Chapman’s bounty hunting. Dog The Bounty Hunter made its television debut on August 30, 2004.

Interesting facts: This smidgeon of personal integrity earned him the nickname “Dog,” both as the backward spelling of “God” as well as a homage for his loyalty to his gang of brothers.

Do you think Duane Chapman’s height or the other facts are incorrect? Do you know DUane Chapman’s weight? Or do you have any other comments about this page, please leave a comment here!